Asako Yoshikawa was born in Ichikawa, Japan and her early studies were undertaken at Toho University.
Upon her Graduation, Asako studies in Roma, Italy at the Santa Cecilia Academy completing the extraordinary cours with Tina Carimarelli and Ricardo Brongola.
During this period, Asako worked as a Duo with the famous virtuoso Henryk Szeryng. Additional studies were with Tibor Varga at the Accademia Chigiana in Siena.
On completion of her studies there, Miss Yoshikawa was awarded the Highest Diploma with Full Honours,and was a Major Prize Winner at Tibor Varga International Violin Competition.

Her international debut as soloist was made the following year at La Fenice in Venezia, and since that time has appeared at all major international venues.
Asako Yoshikawa is regarded as a Chamber Music specialist and participates in both European and Asian Festivals each year, in addition to being Professor for the Toho Music Academy.

Asako has been the Concertmistress of Tokyo Bach Ensemble as well as the Tokyo Bach Solisten, and can be heard on the recordings Duo Serenade with Federico Agostini, and the Trio Amati.
Her recording of Yugen, Japanese contemporary violin sonata has received much acclaim.
Presently, Asako Yoshikawa is Director of Tateshina Music Festival,the Tateshina Music Competition and is on the jury of several International Competition in Japan and Asia.
Miss Yoshikawa performs on an Andrea Guarnerius violin of 1680. 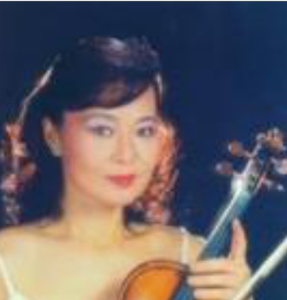