"Francesco Pepicelli's chisel".
This is the original metaphor used by a reporter-reviewer to describe his delivery of the Haydn Concert at the Teatro Grande in Brescia, which was greeted with long, heartfelt applause from the audience. Other performances worthy of note include the Schumann Concert directed by Daniele Gatti at the Sala Verdi in Milan, and the Saint-Saëns Concert with Stefan Anton Reck on the podium. Another touching moment commemorated the victims of the massacre on 2 August in Bologna in 2007, when he played two pieces for the first time ever as a soloist with the Orchestra del Comunale di Bologna and the Filarmonica Toscanini, who came together for the occasion in front of an audience of over 2000 people as part of a live TV broadcast by RAI.
He has always stayed true to his love for chamber music, however, and spent 30 years working with Duo Pepicelli and his brother Angelo on piano, as well as a decade with the Trio Metamorphosi, with the same pianist and with Mauro Loguercio as the violinist. He has performed over 700 times all around the world, from Carnegie Hall in New York to Suntory Hall in Tokyo.
Since the 1990s, he recorded more than 10 CDs for various record companies (Naxos, Camerata Tokyo etc.) and CDs for the Amadeus magazine, in collaboration with clarinetist Alessandro Carbonare and violinist Marco Rizzi.
Educational activities have played, and still play, an important role in his musical life, from the hundreds of students he has trained at the Conservatory of Perugia, to the many masterclasses he has given in Europe and Japan. Many young cellists and chamber musicians have subsequently made a name for themselves in international competitions and orchestral contests, both in Europe and in South America, after having kick-started their careers with him.
At the beginning of his career, when he was still very young, he found important moments for his growth and maturity when he had the opportunity to meet and work with famous artists such as Paul Tortelier, David Geringas, Antonio Janigro and Rocco Filippini.
Memorably, during that same youthful period, he toured as the first solo cellist of the Orchestra Mahler under the guidance of Claudio Abbado, where he played live on the radio from the Musikverein of Vienna for 19 radio stations around the world. 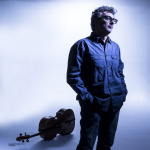